Community offenders managed by New Plymouth Community Corrections are helping to make the Kaitake Range predator-free, with the goal of bringing kākā and kiwi back to the area.

As part of their community work sentence, the men and women are making DOC 200 predator boxes for the Taranaki Mounga Project.  Up to eight people are involved in making the boxes, which resembles a production line process, in the tool room at New Plymouth Community Corrections.

The boxes are then fitted with traps installed by the Department of Conservation that will catch stoats and rats on the range. Volunteers from Kaitake Ranges Conservation Trust then set, check and maintain the traps along several traplines in the area.

Senior Community Work Supervisor Bruce Ball says it’s a project people can see the benefit in.  “The men and women are engaged in what they’re doing; they’re learning some new skills, and they’re helping with conservation efforts.”

The Taranaki Mounga Project has calculated about 230 stoat traps have been made by the community work party so far. 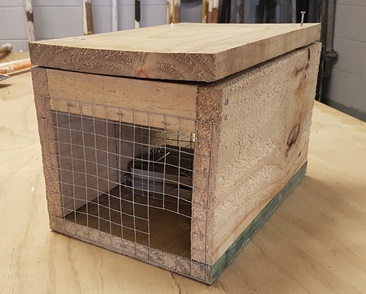 The most boxes produced in the tool room in one day is 63.

Sean Zieltjes, Project Manager for the Taranaki Mounga Project says his team works with Community Corrections and talk to the community work party about what they’re making and why, what the project’s vision is and how they’re important in making Kaitake Ranges predator-free.

Community work is a reparative sentence, where the work party does unpaid work on local projects.

Taranaki Mounga is a conservation project to secure the mountain, ranges and islands of Taranaki from pests, restore and revitalise wildlife, and transform the ecological resilience of the project area to a state reflecting the mounga’s (mountain) importance long into the future.