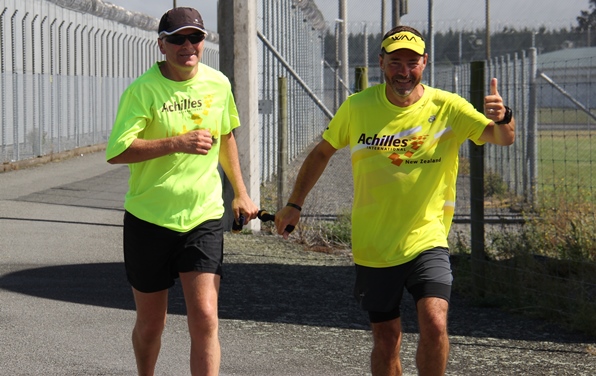 Many New Year resolutions will likely list the completion of a half or full marathon as a goal and yesterday 17 prisoners at Christchurch Men’s Prison’s Youth Unit ticked that challenge off their bucket list.

The 2019 Youth Unit Marathon started at 6.35am in light rain but the weather had cleared by the time runners made the finish line. It’s the second year the marathon has been run by prisoners completing their Duke of Edinburgh award, with the drive of Principal Corrections Officer (PCO) Gary Smallridge setting them the goals.

17 youth prisoners took part in the run, with 16 completing a half marathon. One prisoner finished the full marathon with a time just over five hours while one of the half marathoners had only removed a moonboot a week ago, after recovering from a broken toe. “Running together is a leveller and these young men have learnt from their fellow runners that if you train for something, support each other and stick at it even when it’s tough, you can achieve a good result.”

“There were lots of sore legs, lots of blisters and happy and surprisingly high spirited young men at the finish line.”

“The marathon has given the boys a sense of achievement and pride in their own abilities. The boys, along with the PCO and some other keen staff run most mornings throughout the year but additional effort is put in over the last couple of months to improve fitness.”

“All the runners were cheered on by other prisoners in the yards inside the prison and staff at various locations along their route,” said Joanne.

Two staff and two guests, including a visually impaired runner who flew down from Wellington to compete on the day completed the full marathon. The overall winner was one of the prison’s psychologists who finished in a time of 4 hours 31 minutes.

“The boys took great inspiration from Dave Piper, who we believe is the first visually impaired person in the world to complete a marathon inside a prison. It showed the boys that despite challenges, great things can be achieved,” said Joanne.

The marathon course is set out around the internal perimeter fence of the prison wire and includes 19 laps and a final 200m sprint to the finish line to complete the full marathon distance of 42kms.

A presentation of awards will happen in a few days time when the runners have recovered.