A set of new multi-ball boxes featured at the International Table Tennis Federation (ITTF) under 12 Oceania Hopes Week and Challenge in Hamilton during the school holidays.

The boxes were constructed by paihere working in the industries area at Spring Hill, and then beautifully decorated by four Puna Tatari Special Treatment Unit (STU) graduates. The designs include flags of the nations competing in the event, the ITTF Oceania and Oceania Hopes logos and Hamilton’s Fairfield Bridge. 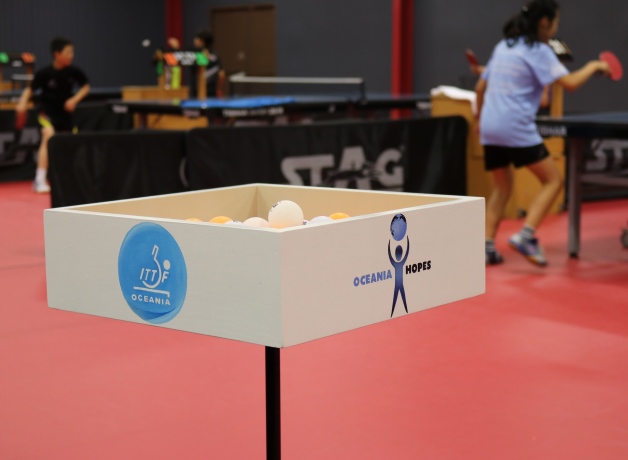 “The men who painted the boxes are very talented, but it wasn’t about selecting the best artists - it was more about choosing men who are on the right pathway to pro-social change and want to give back to the wider community,” says Paul.

“Some of these men don’t look so great on paper, but working closely with them you can see the positive changes they’ve made.”

German National Coach Eva Jeler was in Hamilton for the week, giving the young competitors some pointers throughout the event. She said the boxes were eye-catching and great for training.

“They’re the best multi-ball boxes I’ve seen; aesthetically, they’re beautiful. The only mistake they made was that they didn’t make more.”

Multi-ball is an intense method of training, which involves the coach feeding a high repetition of balls from the side of the table. Having a box of balls close by during multi-ball sessions allows for quick delivery and more efficient training. The boxes can also be used in tournaments to hold drink bottles and towels. The ITTF Hopes Week and Challenge is a worldwide event, and one of the ITTF’s many development initiatives. This is the first time Waikato Table Tennis has hosted the event since it began in 2009.

Each year, Oceania’s best table tennis players aged 12 and under come together for six days of training, followed by a day of competition. This year Wong Bae and Hannah Goh, both from Australia, took out the top spots.

As winners of the Oceania Hopes Challenge the pair will be invited to participate in the ITTF World Hopes Week and Challenge in Oman this August, where they’ll compete against the world’s best young table tennis players.