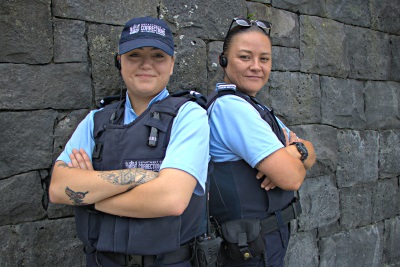 The old adage of not mixing family and work could not be further from the truth for mother and daughter Corrections Officers, Sarai and Latisha Morris.

After seeing Sarai’s enthusiasm for her role as a Corrections Officer at Auckland Region Women’s Corrections Facility, Latisha was keen to follow in her mum’s footsteps and joined the organisation in 2019.

“Mum would come home every day with different stories about how she’d supported women in the prison, and I wanted to do the same,” said Latisha.

Sarai and Latisha are among over 10,000 Corrections staff across New Zealand being recognised on National Corrections Day on Friday 17 January 2020 for their work in reducing re-offending and keeping New Zealanders safe.

The theme for National Corrections Day this year is “We are family.” It’s a fitting theme for Ara Poutama Aotearoa – the Department of Corrections, with whānau (relationships) being one of the five values underpinning how we operate as a department.

After working in the automotive industry for many years, Sarai wanted the opportunity to make a difference in her community. She joined the team at Auckland Region’s Women’s Corrections Facility in 2018.

She believes bringing up four kids has well equipped her for her role behind the wire.

“The multi-tasking and problem-solving skills I’ve gained running a busy household, as well as being able to deescalate disagreements, are tools I’ve brought with me into the prison environment,” said Sarai.

“Many of the women that my team manage are mothers and grandmothers, and they struggle being separated from their children. Being a mum means that I have empathy for what they are going through and I have a good understanding of the emotional support they need.”

A lot of parents would be worried about their child working in a prison, but Sarai knows her daughter is in safe hands.

“The training we both received has given us the tools to cope with any situation that may arise. We’re well supported by our colleagues, so I know that Latisha is safe.”

The pair work at Auckland Region Women’s Corrections Facility but are based in different units. They feel that working in the same role, and one that can be demanding at times, has brought them closer together.

“It’s really handy having mum as a sounding board at work. We share similar experiences and both have a desire to help people to make positive changes in their lives. We’ve forged a really special bond because of our work,” said Latisha.

“Mum is so passionate about being a Corrections Officer. I’m really proud of what she does and she inspired me to be proud about what I do. Hopefully one day my own kids will be proud of what I do as well.”

Ara Poutama Aotearoa – the Department of Corrections is made up of staff who work in a range of roles within the community and custodial environment including Corrections Officers, Probation Officers, Case Managers and nurses.

Corrections Day was established by Corrective Services New South Wales in 2017 and was adopted nationally in Australia in 2018. This is the second year that Ara Poutama Aotearoa has also formally acknowledged the day.