Prisoners build house for a whānau in need

A two-bedroom house built by prisoners will become a home for a whānau in need thanks to a partnership between WelTec, Kāinga Ora (previously Housing New Zealand) and Rimutaka Prison. The house was built by nine men taking part in a 36-week construction trade skill training programme delivered by WelTec at the prison.

Through a housing supply agreement between WelTec and Kāinga Ora the property will be used as state housing in either Porirua, the Hutt Valley or Palmerston North.

A graduation ceremony took place at the prison on Thursday 19 December to celebrate the men’s achievements completing the house and gaining the New Zealand Certificate in Construction Trade Skills (Level 3) carpentry.

Minister Kelvin Davis and Corrections Chief Executive Christine Stevenson were amongst the guests at the event. 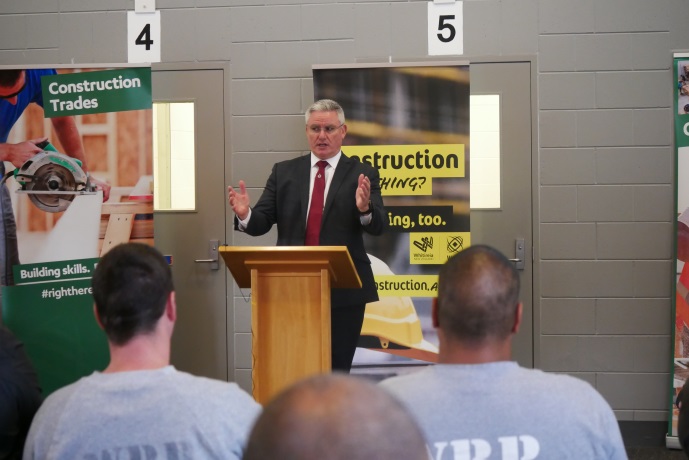 “It’s a real buzz for the guys to know they’re putting a roof over the head of a whānau on the outside. This house has given the men the opportunity to make a tangible contribution to their local community as well as enabling them to learn and earn an industry recognised qualification,” says Ants Puki, Principal Instructor at Rimutaka.

“Our 12-year partnership with WelTec has given almost 500 men at Rimutaka the tools to build a better, more positive future for themselves by earning skills and qualifications that can help them gain good long-term jobs when they are released. This in turn gives them a better chance of safely reintegrating back into society.”

During the Christmas break, men at Rimutaka undertaking the Level 3 painting and decorating programme will spend time finishing the house to make it ready for its new owners to move in early in the New Year.

This is the third house to be built at Rimutaka Prison, and the second of which to provide a home for a family in need.

WelTec and Kāinga Ora are working together to build 53 homes for families in need over the next five years as part of the new housing supply agreement. Houses built at Rimutaka Prison will contribute to this work.