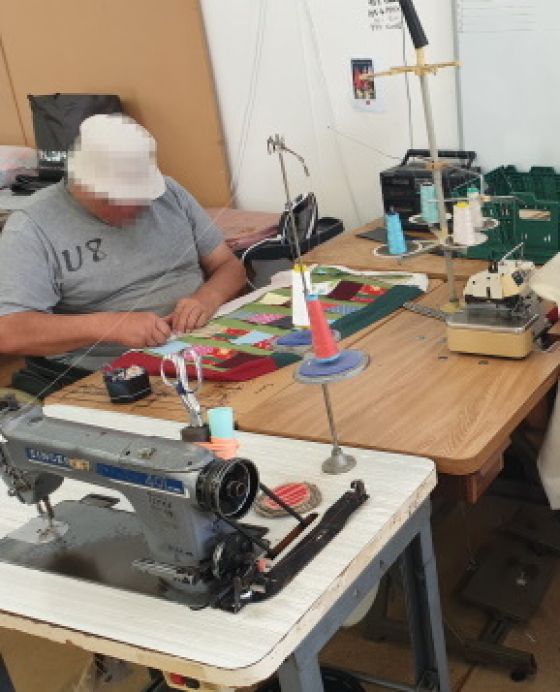 At Hawke’s Bay Regional Prison, Instructor Catering Cheryl Hall and her team of three men, known as the Sewing Room Crew, are producing beautifully sewn items for charity while preventing tons of waste being sent to the landfill.

Colourful quilts, blankets, pillows, and pet beds made by the Crew are being dropped off to families in need.

Nadine from local charity Re Source HB says the work Cheryl and the men are producing is having a positive impact in the community.

“Their contributions are hugely appreciated and are making such a difference to those who would otherwise go without,” says Nadine. “It’s an absolute thrill to pass these beautiful pieces on to people in need. The bonus is that we’re preventing tons of waste being sent to the landfill.”

Materials for the sewn goods come from public donations and local businesses. One year, an unexpected supplier was Bostock NZ. As a requirement, every year Recognised Seasonal Employer (RSE) workers are given new bedding at the start of the season.

To save vast amounts being sent to the landfill, Re Source HB pick up the old bedding and deliver it to HBRP.

Cheryl and the men then get to work by cleaning, resewing, and upcycling the items before being rehomed to locals in need.

They’ve recovered old pillows, turned old blankets into quilts, duvets into pet beds, towels into dish cloths and have made bags for children.

During lockdown, Re Source HB were called to attend to a family whose house and belongings burnt down in a housefire.

Nadine says when they arrived, Dad was understandably grim but surprised by the donation of items.

“When he took the bag of items you could see he was really touched and hadn’t expected anything like the type of support he was receiving. We couldn’t take away the enormity of what happened to this family, but thanks to Cheryl and the men, the family had warm bedding, comfort items, and their dog had a place to sleep.”

Cheryl says the men love coming into the sewing room. They start off sewing simple items such as bag handles before moving onto more fiddly projects and using the overlockers.

The men gain a great sense of achievement when they complete their projects. They’re positive and engaged around the ability to produce items for those in the community who need support.

“I print out the great feedback we receive from the community. It’s important the men know what they’re doing is making a positive difference in someone’s life,” says Cheryl.

Alongside Re Source HB, items are donated to The Salvation Army, Breast Cancer BOP, Aroha in Anzac Park, SPCA, and Animal and Wildlife Rescue.