This section is based on counts of the number of offenders with a "community sentenced" status at given snapshot dates. The earlier part of this section provides trends from 1980 to June 2009, followed by more detailed analysis for 30 June 2009. These offenders represent only part of the workload of the community probation service, who also manages "prison release ordered" offenders.

It is important to note that many community sentenced offenders will be serving more than one type of community sentence at a time. For instance, from the time the impact of the Sentencing Act 2002 stabilised until 2007, typically around 50% of those serving a supervision sentence had been concurrently serving a community work sentence. As this report has a one-day/one-status approach to counting offenders, those with concurrent status are (unless otherwise noted) resolved to a single major status to avoid double counting.

The new Home detention, Community detention and Intensive supervision sentences may be used in combination with other sentences and in section 7.8 "Community sentence snapshot trend by sentence types and combinations", some secondary analysis of this is included. However generally, offenders are only counted according to their highest ranked status, using the order below:

* Analysis of prison and prison release management is covered in other sections.

In October 2007 it became possible for the Community Probation Service to exercise some extra discretion over raising breach of sentence charges for offenders finishing up sentences of Community Work. Prior to October 2007 it was not legal for CPS to manage an offender beyond a single "maximum completion date" for the community work. Since October 2007 the rule became "the offender must serve at least 100 hours in every 6-month period" … "until the number of hours imposed under the sentence has been served". This change combined with the discretion to assess if an offender had a reasonable excuse for late performance has meant that the Community Probation Service can now breach an offender earlier in a community work sentence for non performance but also that the offender may now be managed beyond what was originally known as the "maximum completion date".

This change in law has opened up a new conceptual management type; that of Community Work management beyond the expected completion date. It is possible that future reports will describe this group separately. Currently however, such offenders show up as extra growth in the Community Work muster. 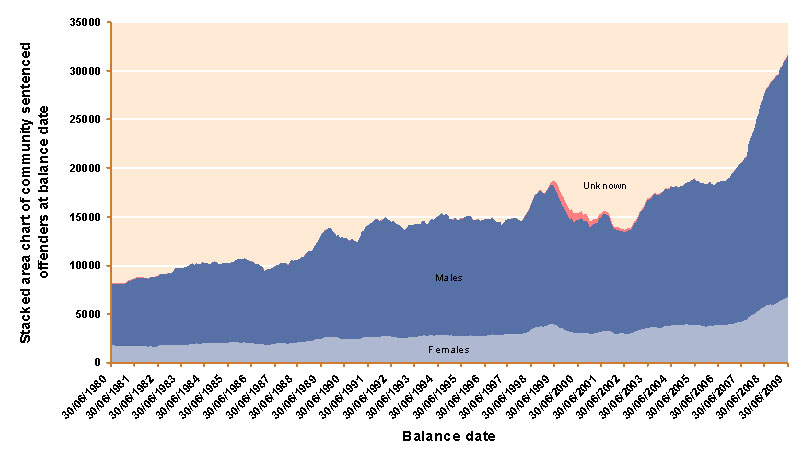 The graph above shows unprecedented growth in community sentenced musters over the last three years. As noted in the overview this is partly due to a business rule / counting rule change where Community Work offenders being managed beyond their expected completion dates have grown from zero in 2006 to around 5000 in 2009 and are made up of: In the graph above, the line labelled "Unknown" is made up almost entirely of offenders for whom Corrections has no date of birth information, along with a few where the data is clearly wrong. The apparent dip in counts of offenders in each of the other age brackets between 1999 and 2004 would be much smaller if these "Unknowns" had been able to be assigned to appropriate age groups. 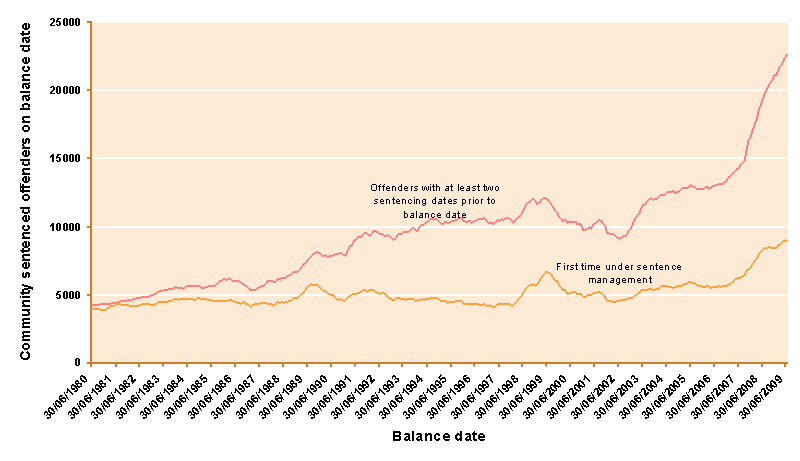 In the graph above, it can be seen that a large part of the recent growth in offenders on "community sentenced" management relates to known recidivist offenders. The graph above displays only four years of history whereas most other graphs in this section give 29 years of history. The result is that the unprecedented growth in community sentenced musters over the last four years does not appear as steep as in other graphs. The graph shows a small step change in October 2007 that resulted from a counting rule change at that time followed by the ramp up of various combinations of the new community sentences introduced by the Criminal Justice Reform Bill 2007. 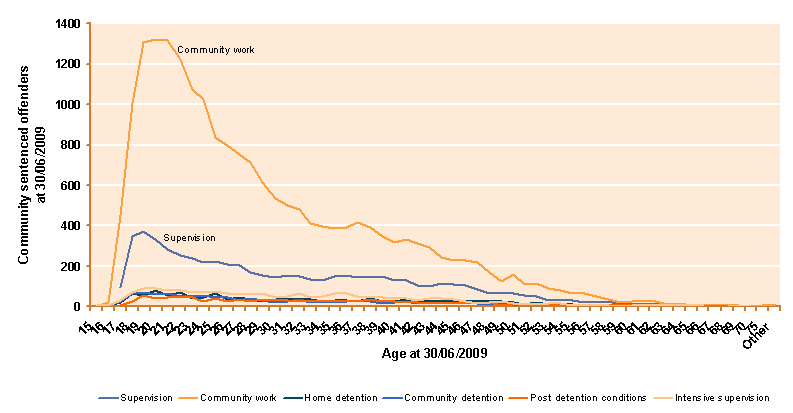