This section is based on counts of the number of offenders with a "prison sentenced" status at given snapshot dates. The term "prison sentenced" used here differs slightly from the concept of prison muster used in other reports since it is based on Court and New Zealand Parole Board directives rather than muster counts. For more detail on this see section 11, Data source and enrichment methodology. The prison sentenced population demonstrates continuous and steady growth since 1986. The seasonal pattern of reduced numbers toward the end of each year is well established. It reflects the influence of the prisoner Christmas release policy[2] as well as cycles of activity involving Police and the Courts. Notable is the drop in numbers that commenced in October 2007. This is associated in part with an unusually high seasonal peak in the year prior, and also with the introduction of new community sentences that placed emphasis on keeping non-violent offenders out of jail. These new sentences were defined in the Criminal Justice Reform Bill 2007, and were incorporated as amendments to the Sentencing Act 2002 and the Parole Act 2002. Interestingly, the drop in prison sentenced offender counts after the introduction of the new community sentences in October 2007 appears to have applied to Mâori and European offenders but not to any marked extent to Pacific Peoples or Asians. 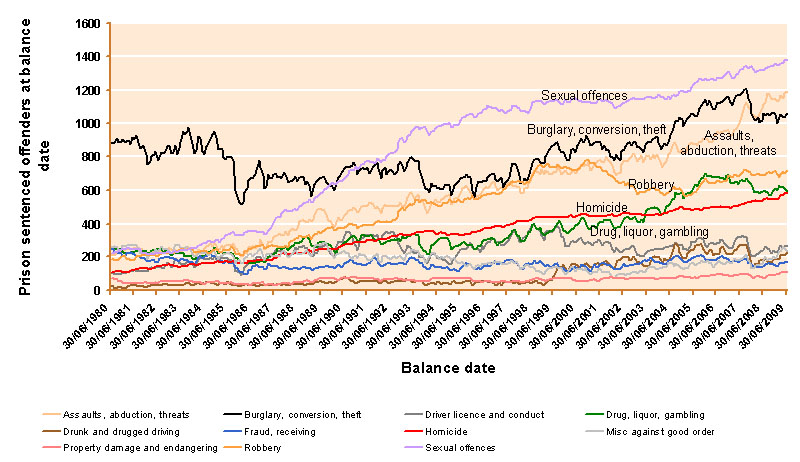 The graph above indicates that, thirty years ago, dishonesty offenders predominated in the prison population. However, over the intervening period, much of the growth has been driven by an accumulation of those sentenced for violent and sexual offending, with drug offender counts also rising sharply in recent years.

The relative proportions in each offence category (as indicated above) is partly a reflection of the process whereby more serious offences result in longer sentences, which lead to higher rates of accumulation in the prison system. A high count of prisoners on a particular balance date could have resulted from either a high inflow of the prisoner category (burglary for example) or from high rates of accumulation of the prisoner category due to long sentences (homicide for example).

The trend lines above hide considerable complexity. Since 1980, the rules around the proportion of sentence served and the timing of release have changed, as has the typical proportion of a sentence that is served as remand. The seasonal cycle discussed above, is also revealed to be a phenomenon restricted to the shorter-term prisoners.

The introduction of new community sentences in October 2007 can be seen above to have had a major impact (as intended) on short term prisoner counts with little or no impact obvious on long term and indeterminate sentenced prisoner counts.

< recent in occurring off levelling some with group this observed be can growth sustained and Significant years. 2 than greater of sentences determinate serving those are offenders sentenced prison term">

Life and Preventive Detention ("indeterminate term") offenders are slowly but steadily growing. Though numbers of new starts on indeterminate sentences are low (typically less than 50 per year), they remain in prison for long periods of time, and therefore are accumulating to become a significant sub-set of the prisoner population. The graph above is produced from a series of 30th June prisoner snapshots. It provides a breakdown of the sentenced prisoner population at each snapshot by the five year band during which prisoners recorded their first conviction (includes convictions resulting in fines, discharges or disqualifications). The colour differentiated strata from left to right should not be interpreted as meaning that the same offenders were in prison continuously. Each band signifies the number of beds occupied by offenders in a cohort, which will be made up of a changing and re-circulating set of offenders. The "discretionary release eligible" area on the graph above indicates that at 30/06/2009 some 3110 (47%) sentenced prisoners could have been released immediately if the parole board could have been convinced that they posed no risk to the community.

The growth in prisoners who are eligible for discretionary release since 2002 reflects the influence of parole laws introduced in that year, which meant that parole eligibility occurred earlier in the sentences of longer-term prisoners. However, this has not meant that prisoners have been released earlier, merely that the possibility of more adaptive justice has existed. The graph above provides a breakdown of prison sentenced offenders by age and ethnicity, as at 30 June 2009. This indicates the preponderance of Mâori males in this population, especially in the younger age groups. For example, there were approximately twice as many Mâori 25 year old males in prison than there were NZ European males of the same age. Amongst those over 40 years of age, NZ European males become more numerous. These figures contrast sharply with the statistics for the general population given in the following graph.

The source of data for the above graph was the Statistics New Zealand Table Builder website, from which the "Projected Ethnic Population of New Zealand, by Age and Sex, 2006 (base)" for 2009 using series 6 projection was extracted[3]. The graph above indicates that on 30 June 2009, the majority of prison sentenced offenders for burglary, assaults, and robbery are in the younger age brackets, whereas prisoners who have committed drug, sex and homicide offences are typically older.

[2] Prisoners whose release date falls between mid-December and early January the following year are eligible to be released early in December; this policy aims to promote reintegration by ensuring that prisoners are able to access relevant social services and supports that might otherwise be closed during the Christmas - New Year period.

[3] These population estimates make use of the multi-ethnicity concept such that individuals are counted in all ethnic groups they identify with. One consequence of this is that the total of "Ethnic Populations" does not equal the total population of the country. Similarly, the imprisonment rates for each group shown are based on the ratio of prison sentenced offenders at 30/06/2009 relative to the total population as at 30/06/2009 (as estimated by Statistics New Zealand). This method is imperfect due to differences in circumstances of how, when and where the ethnicity question was asked (in prison vs. in the National census).  However, the numbers still provide a useful comparison tool.