The Prison Performance Tables provide a quarterly grading of the performance of all prisons within the Corrections network. A number of factors are used in this analysis, and results are weighted to account for the particular composition of prisoners and facilities at each site.

In previous years, all prison performance metrics were combined in a single Prison Performance Table, published quarterly. Performance is now separated into two tables, to improve the transparency and clarity of performance results and metrics.

The Prison Performance Tables for the previous four quarters are presented over leaf. 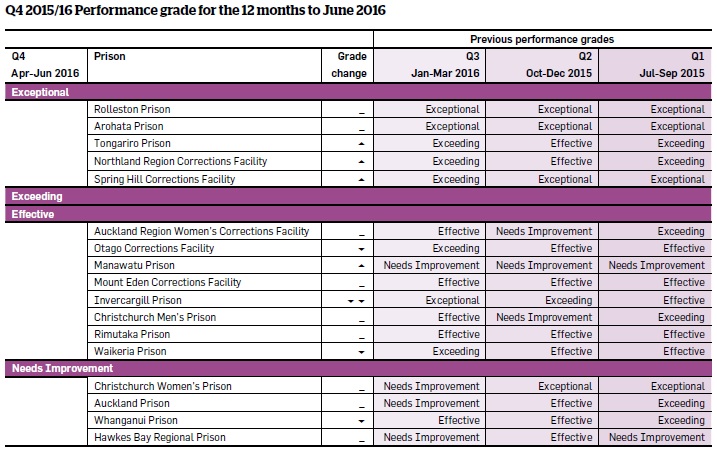 Auckland South Corrections Facility (ASCF)
The Custodial Performance Table calculates the performance grade for each prison based on the results for the quarter, together with the results for the previous three quarters (to give a rolling 12 month period of historic performance results). ASCF commenced operation in May 2015. Up until October 2015 ASCF was building up to full capacity and therefore the performance results over the period to October 2015 are not directly comparable to other prisons. A comparable assessment of custodial performance can be reliably calculated for ASCF in the first quarter of the 2016/17 financial year. ASCF will therefore be incorporated into the Custodial Performance Table at that time.

Notwithstanding this, and while not directly comparable, if the results from October 2015 to June 2016 were extrapolated to a 12 month period to derive a proxy performance grade, ASCF would be graded at the top of the needs improvement category. The key determinants that influence the ASCF proxy grading are similar to those that have influenced the grade of other prisons. These include serious prisoner on prisoners assaults, prisoner on staff assaults, positive drug tests and justified complaints.

Prisons within a performance grade are ordered by their respective Internal Procedures score. Auckland South Corrections Facility
As noted in the commentary supporting the Prison Custodial Performance Table, performance results (information) for ASCF will be reported from quarter one of the 2016/17 financial period. The rehabilitation performance results will not be directly incorporated into the Prison Rehabilitation Performance Table, but reported separately. This is due to the assessment of ASCF’s performance against the rehabilitation outcomes (as set out under the current contract) being calculated on a basis that is different to, and therefore not directly comparable with, the assessment of all other prisons.

Note
Due to the Step-In at MECF the rehabilitation targets have not been able to be assessed during this time.