This appropriation is limited to the provision of case management and interventions designed to address the underlying causes of criminal re-offending.

Corrections reduces re-offending by providing offenders with opportunities for rehabilitation and reintegration through five outputs: case management, rehabilitation, training and education, offender employment and reintegration. Providing these opportunities allows offenders to have the skills and support to lead law-abiding lives after the end of their sentences and orders.

Case management focuses on planning and managing a prisoner’s rehabilitation and reintegration needs, which are reflected in high quality offender plans for each individual.

Rehabilitation challenges behaviours that lead to offending. When appropriate programmes and pathways are made available and offenders are motivated to take part in them, there is a better chance that they will successfully reintegrate into the community at the end of their sentence or order.

Reintegration services managed by Corrections focus on creating pathways for people integrating back into the community, by assisting them to address employment, accommodation, living skills, health/well-being, community links and other reintegration needs.

The offender journey as it relates to rehabilitation and reintegration:

The process of case management encompasses the planning and management of a prisoner’s rehabilitation and reintegration needs, which are detailed in an individual offender plan.

Case managers work with offenders in custody to facilitate services and deliver active and caring support to prepare the offender to live an offence-free life and to ensure a successful transition to probation colleagues or directly into the community.

After creating an offender plan, the case managers then manage the plan proactively throughout the sentence to ensure the offender is able to complete the required interventions, often by assisting the offender to resolve barriers to rehabilitation or facilitating external services to meet their needs.

Corrections strives to break the cycle of re-offending by identifying and working with those who are most likely to re-offend.

Research has shown that re-offending is not reduced simply by incarcerating offenders, or by increasing the harshness of their sentences. Well-designed and delivered programmes can have a real effect on re-offending.

Corrections assesses each and every offender to provide programmes that are appropriate to their level of risk, rehabilitative needs and ability to be responsive to the programme. Programmes include motivation to change, cognitive-behavioural interventions and general skills.

Research also shows that people are less likely to re-offend if they have the right support around them, which helps to keep everyone safe. The key areas are employment, accommodation, education and training, skills for life and oranga and family/whanau/community relationships. Support can come from many people including family/whanau, community groups, counsellors, employers and Corrections staff.

Reintegration is not just for people leaving prison. People who have served sentences and orders in the community also need help to make a fresh start and play a positive role in their communities and families.

The Industry, Treatment and Learning (ITL) framework is also a key part of reducing re-offending. Corrections began piloting the framework as Working Prisons in 2012 and since then all Corrections-managed prisons have fully transitioned to the framework. ITL prisons engage eligible prisoners in a regular 40 hour work week to prepare them for release and reintegration; the 40 hours are made up of rehabilitation and reintegration, education and training, employment and other constructive activities.

In order to continue our drive towards achieving our reducing re-offending goal, Corrections has taken a more targeted approach to addressing our use of rehabilitation programmes. Through the RR25% Boost initiative, Corrections has focused on increasing the number of short interventions to help more offenders, with the aim of improving their chances of living crime-free after completing their sentences and orders. Corrections has increased access to rehabilitation programmes and boosted participation in industries that lead to sustainable work. Corrections supports offenders and their families in the lead up to leaving prison, providing help to access ongoing treatment, rehabilitation, employment and housing.

The chart below demonstrates that the majority of offenders serving community-based sentences are serving sentences of one year or less. By increasing access to interventions in our largest cohort, Corrections is able to help more offenders to address their rehabilitation needs.

The cost associated with the RR25% Boost initiative has been absorbed within our 2015/16 baseline. Corrections is committed to increasing the level of literacy, education and employment training for prisoners and offenders. As a result, more people will have the skills and experience that employers require and will have a better chance of obtaining work. Offenders who are able to work upon release reduce their overall risk of re-offending.

The following table shows that the number of qualifications achieved by prisoners continues to exceed expectations.

HOW MUCH DID IT COST

** Corrections obtained Cabinet approval to run an output class deficit for 2016 as a result of an expected shortfall in offender employment activity revenue, with the exception that sufficient future surpluses will be retained to cover the deficit.

The total expense for this appropriation was $176.3 million. Direct expenses accounted for 74% of total expenses in 2016, which included approximately $82.1 million on the provision of intervention programmes and case management, $30.3 million on offender employment activities, and $18.1 million on psychological services.

Refer to the chart below for the composition of total expenditure by major expense category. Actual expenditure was $7.2 million higher than 2015 actuals, mainly due to:

Actual expenditure was lower than Supp. estimates, mainly reflecting pre-approved in-principle expense transfers for the Out of Gate programme and the Alcohol and Other Drug Aftercare initiative.

Other revenue mainly comprises sale of goods relating to offender employment activities, over half of which relates to farming.

Other revenue was $16.2 million lower than 2015 actuals, mainly due to the sale of the Tongariro/Rangipo forest crop and land at 30 June 2015, and a continued reduction in milk prices.

Other revenue was slightly lower than Supp. estimates mainly due to timing of livestock sales.

Refer to the chart below for the composition of other revenue. 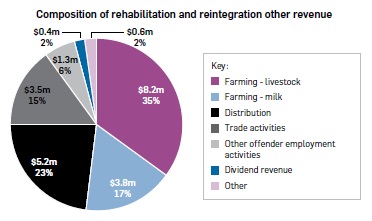 5 Corrections Act 2004 – Section 51 Management Plans. This section applied to every prisoner who is: