Minimising the risk of harm to others

Violence is always a risk to our staff, as many offenders have a history of resorting to violent behaviour as a means of resolving issues or expressing themselves. Violence reduces the likelihood of an offender successfully completing their sentence, creates an unsafe work environment for staff and diverts resources to respond effectively. Understanding and managing this risk is a challenge common to all correctional jurisdictions, and reducing violence in prisons is a key priority for Corrections.

Corrections has a responsibility to protect the health and safety of our staff and the offenders that they manage. Central to this goal is our ability to record incidents of violence, so that such cases can be investigated to inform improvements in the future. Corrections has put initiatives in place in 2015/16 to advance this goal.

We have seen improved reporting of assaults this year, as a result of the campaign to make all instances of violence in prisons unacceptable. In 2012 a corrections officer was seriously assaulted by a prisoner, which was the catalyst for change in safety measures within Corrections, for seeking more severe punishments being handed out to offending prisoners and the beginning of the Staff Safety Plan programme. This particular prisoner was given a 10 year jail term on top of their existing sentence.

As a result of the Staff Safety Plan and increasing prison population we have seen the reported number of nonserious and no injury assaults on staff increase compared to the previous financial year.

Serious assaults on prisoners by other prisoners occurred 45 times in 2015/16, which is in line with the average of the past five years, and shows that progress is being made against an increasing prison population.

Corrections has a continued focus of zero tolerance for violence

We are working continuously to improve safety and security at all prison sites. Every instance of violence is taken seriously, and we will not tolerate prisoners using violence against others. A prisoner responsible for violence will be held to account for their actions.

While no assault is acceptable, it is an unfortunate reality that they will occur from time to time as we manage some of New Zealand’s most difficult and challenging citizens.

Identifying and understanding the drivers for assaults is critical to reducing levels of violence in prisons. Prisoners are motivated by a range of factors, and knowledge of these factors can help Corrections to manage them more effectively and so reduce violence. We use a framework of prevention first, followed by responding, holding perpetrators to account, and then reviewing processes to improve our efforts in the future. 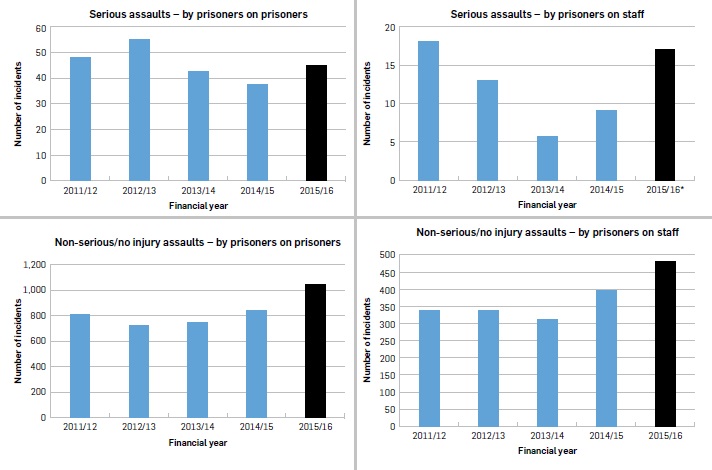 * This financial year, the number of prisoner on staff assaults was adversely affected by two incidents involving the same prisoner. In one event the prisoner assaulted three staff members and in the second event, the same prisoner assaulted another staff member. In addition, the increase in the number of assaults has occurred during a period that has seen an increase in the prison population by approximately 1,000 prisoners over the last two years.