Appropriation - Sentences and Orders Served in the Community

This appropriation is limited to the management and delivery of sentences and orders served in the community and the electronic monitoring of people on bail.

Corrections manages home detention sentences, which are imposed by the courts and require the offender to reside at an approved address under strict conditions and monitoring, sometimes including electronic monitoring (EM).

Corrections also manages offenders on electronic monitoring, which can include those monitored as a condition of bail while awaiting a court hearing (EM Bail) and those serving community-based sentences.

Corrections ensures the effective and safe management of offenders in the community through the use of Standards of Practice for probation officers. These are unique to each sentence or order and set the expected level of service, monitoring and compliance required for each offender.

Compliance is achieved when offenders follow all directives and restrictions inherent to the sentence or order (such as attendance at programmes, non-association orders, residential or employment restrictions), experience appropriate consequences in the event of non-compliance and complete the imposed sentence or order.

Any failure by an offender to adhere to a requirement of the sentence is considered to be non-compliance. This could include failure to report as instructed, breaking a curfew, or failure to notify Corrections of an address change.

The average number of offenders in the community has remained relatively stable at approximately 36,000, however the mix of this grouping has been shifting over time with home detention, supervision orders and post release orders increasing in the past year.

The shift in the number of offenders serving different sentences and orders is largely due to offenders committing crimes of a more serious nature, who therefore require additional resources for monitoring and rehabilitation. Upon release, these same offenders are generally given additional conditions from the New Zealand Parole Board.

* An average number has not been used given Returning Offender Orders came into effect in late 2015. Consequently numbers are stated as at 30 June 2016.

Corrections has continued to see a rise in the average number of offenders subject to EM Bail conditions, which allows offenders to continue to live and work in the community while awaiting trial, rather than being held in custody.

There are a number of factors that have contributed to the increased use of EM Bail, including:

Management and delivery of sentences and orders in the community

For 2015/16 Corrections introduced technology which enables community-based staff to access real time information around standards that need to be met, which allows the Department to analyse performance at a more granular level than was possible in previous years.

Completion of standards can be impacted by offenders not attending appointments, which means that the probation officer is unable to meet the standard within the specified timeframe.

This provides useful information which aligns with the work we undertake and helps to identify where follow up work may be required. Using more real time data allows probation officers the ability to respond more quickly to non-compliance, which improves public safety and sentence accountability.

HOW MUCH DID IT COST?

* Forecast financial statements have been prepared using Budget Economic Fiscal Update (BEFU) 2016. The Sentences and Orders Served in the Community appropriation has been merged into a Multi-Category Appropriation called 'Public Safety is Improved' for 2017 in order to align the appropriations with Corrections' strategic outcomes.

The total expense for this appropriation was $206.4 million. The largest category of costs within this output class related to direct personnel expenditure. Other costs associated with this output class include property costs such as rent and utilities, vehicle costs and contract management costs including the electronic monitoring of offenders.

Refer to the chart below for the composition of total expenditure by major expense category. 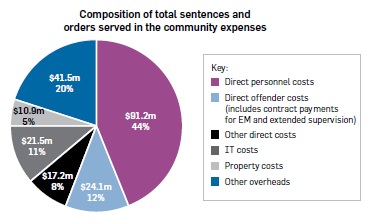 Actual expenditure was $7.3 million lower than 2015 actuals, mainly due to:

3 Full transition of EM Bail operations from NZ Police was completed during January 2014, meaning 2015/16 was the first full year that Corrections was operationally responsible for EM monitoring. This has seen the number and average number of EM Bail conditions increase from 2013/14.

4 The mandatory standards indicators measure the expected level of service to be delivered by probation officers. Probation’s purpose is to contribute to safer communities by holding offenders to account and managing them to: comply with their sentences and orders, reduce their likelihood of re-offending and minimise their risk of harm to others. Each mandatory standard links to at least one of the three elements of probation’s purpose providing a rationale for that standard. A set of definitions is provided to probation officers to ensure consistency of understanding the application.